Contractors have begun installing solar panels on three council buildings this week in a move that will reduce council’s energy use and save thousands of dollars a year.

Solar panels will be installed on the Orange Civic Centre and Orange City Pound, while the existing system at the Orange Aquatic Centre will be doubled in size. 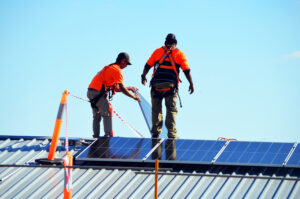 MAKE ENERGY WHILE THE SUN SHINES: Contractors install solar panels on the roof of the Orange City Pound.

“Through consultation, we found the community felt strongly about being more sustainable by promoting renewable energy, reducing waste and protecting our natural resources,” Cr Kidd said.

“Installing solar panels on Council assets was one of the strategies chosen to achieve this goal and funding of $500,000 towards renewable projects was allocated in the budget every year for three years, starting in the current financial year.”

Hear the stories behind the news in ‘The Orange Podcast’

Which Council facilities don’t need power off the grid in daylight hours?

The Orange City Pound will receive a 15.9kW system at a cost of $20,500. It is estimated to provide 55.4 per cent of the pound’s annual electricity requirements and save about $3900 in the first year.

The Civic Centre will receive a 99kW system at a cost of $89,500, which is expected to contribute 9.4 per cent of the centre’s annual electricity requirements and is estimated to save $29,000 in the first year.

The Orange Aquatic Centre will receive a further 99kW system at a cost of $143,800, which will contribute an estimated 15.2 per cent of the annual electricity requirements and save about $23,000 in the first year.

The certificates can then be sold back to parties such as electricity retailers to meet their obligations towards legislated energy savings targets.

“The remainder of the budgeted $500,000 will be rolled over to the next financial year, when more council buildings will be fitted with solar panels,” Cr Nugent said.

“This is a step in the right direction in reducing council’s operational costs. The solar panels installed at the Orange Airport at the end of last year have already resulted in a 78 per cent reduction in energy costs for that building.

“In fact, Orange Airport is now 100 per cent renewable during the day.”

Cr Kidd says Orange City Council has made using renewable energy a priority for many years.

“Long-term residents would remember our first visitors’ centre had solar panels on the roof 20 years ago,” he said.

“The pool has been benefiting from panels we put in four years ago and it’s great they’re going to be doubled.”

The solar panels are expected to be installed and commissioned by the end of June. 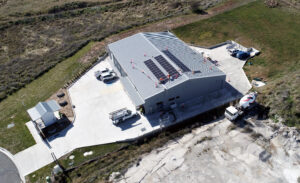 SOLAR ARRAY: The 15.9kW system is expected to provide 55.4 per cent of the pound’s energy requirements.