Orange City Council arborists have resumed treatment of the city’s elm trees as part of a long-running campaign to minimise the damage caused by the Elm Leaf Beetle.

More than 200 street and park trees will be injected with insecticide over the next month in an ongoing bid to ward off the pest, which was discovered in Orange in 2015.

The trees at risk of infestation are the advanced English Elms located around the central business district, which were last treated in 2018. 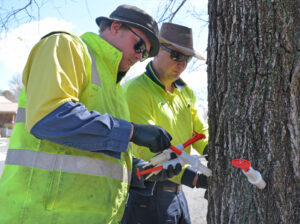 The tiny yellow and green beetles hibernate over winter and emerge in spring to feed on the new leaves of the Elm trees and lay their eggs. The larvae also feed on the leaves, causing them to die and fall off.

The loss of leaves impacts the tree’s ability to produce energy through photosynthesis, affecting its ability to grow and resist disease, and could end up killing the tree.

Injecting the tree trunk with insecticide enables the chemical to travel to the leaf where it kills the beetles and larvae when they eat it, so while there will still be some damage to the leaves, it will lessen as the number of beetles decrease.

Orange Mayor Reg Kidd encouraged residents with elms in their yards to check the trees for signs of damage and seek advice from Orange City Council or consult an arborist or their local nursery.

“We’ve already seen the positive impact of regular treatment on Council’s trees, with damage to trees dropping in the past few seasons,” Cr Reg Kidd said.

HEAR THE STORIES BEHIND THE NEWS IN THE ORANGE PODCAST

(Scroll through to 10.17 to hear more about how Council staff tackle the Elm Leaf Beetle)

“While we won’t ever be rid of this pest, we can all work together to make sure we minimise the damage these beetles cause and ensure the health of our Elm trees.”

Signs of Elm Tree Beetle damage are leaves with holes in them, known as shot-hole damage, caused by the adult beetles, or skeletonisation, where the larvae eat the part of the leaf between the veins.

This page has more information on Orange’s street trees and the campaign to control Elm Leaf Beetle, including a fact sheet for residents.