The winners of the 2022 Banjo Paterson Writing Awards have been announced, with Steeple by John Scholz of Willunda, South Australia, winning the prestigious Short Story section.

Steeple tells an emotional story about a farming couple harvesting their crops with a twist.

Orange City Council’s Services Policy Committee Chair, Cr Mel McDonell thanked everyone who entered and congratulated entrants on the quality of the works.

“I’m thrilled to see this year’s awards attracting entries from all around Australia,, but also delighted to hear that quite a few entries were submitted from around the local area,’ Cr McDonell said. 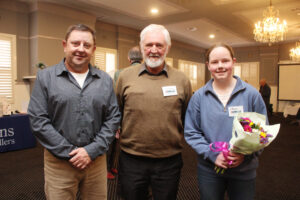 “The judges were definitely spoilt for choice with the quality of entries this year.”

The Contemporary Poetry Award was won by David Judge of Strathfieldsaye, Victoria, for his piece I am who they have been, while the ABC Radio Children’s Award was won by 13-year-old Nemi De Silva, of Brisbane, for her work Blood Ties. Ebony Inman, 13, of Mullion Creek received second place with her short story Runaway.

Mr Judge’s work is a poem about reflection, loss and remembrance while Blood Ties is descriptive story about a family tragedy that turns around their racist views.

All of the winning entries can be viewed on the Central West Libraries’ website www.cwl.nsw.gov.au.

The Banjo Paterson Writing awards were established in 1991 to honour Banjo Paterson, a great Australian writer and favourite son of Orange, with a competition to encourage short story or poetry writing with Australian content.

Judges’ comments on the winning works

“From the very start your use of language reflected an understanding of Australian idiom and relevance to the land and its people… I was at times emotional and overwhelmed by your descriptive phrases and character development… Your story was both believable and unique” “a freshness to it that I felt very much engaged with. I think Banjo would have agreed.” Judge – John Willing PSM

“A bush ballad with a simple rhyme structure, however the syllable patterns and stresses create a metrical pattern that impacts the reader.Choice of colourful, colloquial and Australian language creates a mood and tone that builds a relationship between reader and performer… I look forward to having an opportunity to hear your poem performed.” Judge – Deborah Smith