Work has begun on a $8 million expansion of Orange City Council’s Sewage Treatment Plant, designed to meet the future needs of a growing city.

Earlier in the year Orange City Council awarded construction contract to Precision Civil Infrastructure Pty Ltd. The company established a construction site at the plant last week and the project is expected to be completed by the end of next year. 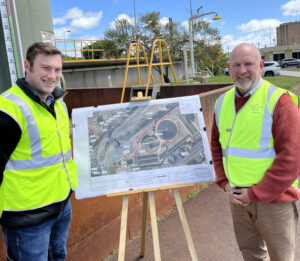 To avoid possible equipment delivery delays, the major equipment for the project, worth $913K was ordered last year and has since been delivered. The project also includes pipe relocation and an internal road upgrade.

The project is funded by Orange City Council through sewer charges.

Orange Mayor Jason Hamling welcomed the start of the project.

“Projects like this will put us in a better position for a city with a growing population,” Cr Hamling said.

“This upgrade will help us cater for higher volumes of waste more efficiently and sustainably.”

“By completing the design stage early and going on to order the equipment it helped us avoid delays and potential cost over-runs,” Cr Evans said.

“It’s good too for ratepayers who see routine amounts for water and sewer on their rate notices to see how this money is being spent to deliver an expanded more efficient system.”

The upgrade will replace equipment at the inlet side of the Sewage Treatment Plant at the stage where wastewater first reaches the plant. Filtering screens which date from 1990s will be replaced by contemporary filters, which remove finer levels of waste. The new equipment is also more energy efficient with expected savings of around $30 thousand a year.

The upgrade of the inlet works will also improve efficiencies and effectiveness of the whole treatment cycle across the plant.

The new screens will also be able to cater for greater peak volumes of wastewater that occur when heavy rain sends unwanted stormwater into the city’s sewerage network.