The state government introduced the changes on July 1, requiring owners of dogs, of a restricted breed or declared to be dangerous, to pay a $195 annual permit in addition to their one-off lifetime pet registration fee. This applies to dogs already registered.

Cats which are not desexed by four months of age are subject to an $80 annual permit, as well as a one-off lifetime pet registration fee. 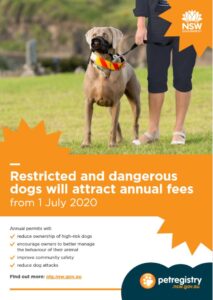 Orange Mayor Reg Kidd said the annual permits would provide an incentive for people to desex their cats.

“Desexing your pet is better for the overall health and wellbeing of the animal,” Cr Kidd said.
“Ultimately it is the responsible thing to do to help reduce the number of cats which end up as strays, killing native wildlife, getting diseases and ending up at city pounds to be euthanised.”

Exemptions are in place for cats registered by 1 July 2020, cats kept for breeding purposes by members of recognised breeding bodies, and cats which cannot be desexed for medical reasons.

“The legislation may encourage people who take on a dog to ensure it receives the right training, care and stimulation so that it never becomes a dangerous dog,” Cr Nugent said.

“Placing further control measures on dangerous and restricted dogs will serve as a further disincentive to owning high-risk dogs.”

Pet owners will be able to pay for annual permits using the online NSW Pet Registry, or through Orange City Council.

Pet owners who fail to obtain an annual permit risk an on-the-spot fine of $700 for restricted or dangerous dogs and $400 for non-desexed cats.