One Library One Book program returns in 2021

Richard Anderson’s book Small Mercies has been chosen for Central West Libraries’ One Library One Book program for 2021.

The innovative community reading program was launched on Monday, encouraging everyone in the region to read and discuss the same book.

One hundred copies of Small Mercies have been distributed across the Central West Libraries footprint – Blayney, Cabonne, Cowra, Forbes and Orange. These copies have been added to the catalogues of the Library’s branches.

Author Richard Anderson will be touring the Central West in April to discuss the book with audiences. 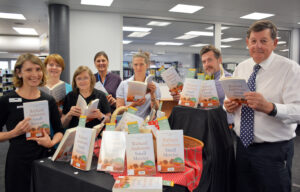 “I’m thrilled Small Mercies has been chosen for the One Library, One Book initiative,” Richard Anderson said.

“It’s a fantastic program, in a special part of the world, and I’m grateful to everyone involved for encouraging reading throughout the community,” he said.

Orange Mayor Reg Kidd encouraged residents to read Small Mercies and talk about it, not only with friends and family but other readers in the region.

“The One Library, One Book program takes the idea of a book club and expands it to cover an entire region,” Cr Kidd said.

“It offers local booklovers the opportunity to expand their reading circle to share their insights and opinions with people they wouldn’t otherwise have the chance to connect with.”

“The book dips into drought, relationships, farming as well as money and power. We think it will resonate with the community,” Mr Brady said.

“We are pleased to bring this book to readers of the Central West. It is also available through Bolinda BorrowBox as an ebook through Central West Libraries.”

It is hoped One Library One Book will be widely embraced on social media with readers of Small Mercies posting discussions about the book and photos of themselves with the book on the Facebook page and #onelibraryonebook.

A husband and wife living on a severely drought-afflicted property take a brief break, only to find that their relationship is parched, too.

After enduring months of extreme drought on their modest freehold, farming couple Dimple and Ruthie face uncertain times on more than one front. Ruthie receives the news every woman dreads. Meanwhile, a wealthy landowner, Wally Oliver, appears on the local radio station, warning small farmers like Dimple and Ruthie that they are doomed, that the sooner they leave the land to large operators like him, the better.

Bracing for a fight on all fronts, the couple decide to take a road trip to confront Oliver. Along the way, not only is their resolve tested, but their relationship as well.

Desperate not to dwell on the past but to face up to the future, Dimple and Ruthie make a crucial decision they soon regret. And when the storm clouds finally roll in across the land they love, there’s more than the rain to contend with.

Told with enormous heart, Small Mercies is a tender love story.  It is a story of a couple who feel they must change to endure, and of the land that is as important as their presence on it.

Richard Anderson is a second-generation farmer from northern New South Wales. He has been running a beef-cattle farm for twenty-five years, but has also worked as a miner and had a stint on the local council. Richard is the author of two rural-crime novels, Retribution and Boxed, both published by Scribe. He lives with his wife, four dogs, and a cat.

Praise for the book:

“A fine-grained study of a marriage and a land in crisis…A wonderful book.”