Orange City Council to light up the town

Orange residents may start to notice a few changes across the city, with new specialist lighting installations at these locations.

One noticeable change will be along Summer Street in the CBD. The current coloured festoon lights that hang in a zig-zag arrangement will shortly be replaced with new white LED lamps. The current festoon lights which are becoming obsolete have a very short lifespan due to constant exposure to harsh environmental conditions such as wind, water and temperature extremes. This then makes the coloured lights less appealing and makes them look poor. Regular light failures also come with high maintenance costs.

The new LED lights being used, performed best in extensive Council testing and are the cheapest option out of all the lighting options. The new white LED bulbs are 600% more efficient than the current incandescent lights, as incandescent sit at 25 watts and the new bulbs will sit a 4 watts.

Annually, the new LED lamps will save over 10,000 Kwh, which equates to a yearly saving of $3000. They will last 15 times longer and reduce the annual maintenance cost of approximately $25,000. The new lamps will also see huge electricity reductions, equating to more than 8 tonnes of carbon dioxide not being released.

Orange City Mayor Cr Reg Kidd said “The new LED festoon lights will give a more consistent and contemporary look to the city’s main street. Once they are switched on in the middle of November, the entire main street and CBD will have a really warm feel to it.”

“There will be slight traffic changes when installation of the new festoons begins, but it will only affect one lane at a time and the parking bays. It is not likely to block traffic for long periods of time.” Cr Kidd said.

“Solar driven fairy lights will also be trialed in four trees in the main street. The trees are located on each corner of the Sale and Summer Street intersection. The fairy lights are designed to add to street scape beautification.”

“One other location which falls under the lighting trial is the Reform Mine. Lighting will shortly be switched on which will see one of the poppet heads structure on top of the historic mine illuminated.” 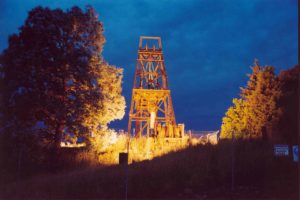