The flight touched down at the Airport at 11.20am, where a welcome reception was held with Orange councillors, Qantas delegates, local industry representatives and business members, before the flight returned to Sydney at noon.

In February the airline announced it would offer flights to the Colour City starting on May 1, however, the plan was put on hold in late April due to COVID-19 restrictions. 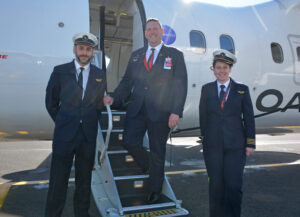 Orange Mayor Reg Kidd has welcomed the airline’s commitment to Orange and said he’s looking forward to the region receiving an economic boost to help recover from the impact of COVID-19.

“Orange has been very popular with visitors since travel restrictions were eased and having an extra airline is going to make it even easier to bring them here,” Cr Reg Kidd said.

“These additional flights will make our fantastic parks, specialty stores, wineries and restaurants more accessible to tourists, while also making it easier to work and do business in the region.”

“Major corporations like Qantas have done their homework and they want to add Orange to their list of destinations,” Cr Sam Romano said.

“It’s an indication they want to grow the number of passengers flying in and out of Orange.

Some of those passengers will want to connect with the airline’s interstate flights and starting their journey with Qantas in Orange could have some advantages.”

QantasLink CEO John Gissing said the national carrier was pleased to be launching flights to Orange at a time when domestic travel was key to Australia’s tourism recovery.

“The local community in Orange has been extremely supportive of QantasLink bringing competition to the route, which will create more competitive airfares and stimulate more demand for people to visit the region,” John Gissing said.

WELCOME: Water-tankers give a warm welcome to the first Qantas flight

“The Orange region is well known for its progressive and sophisticated food and wine scene and its friendly country hospitality so we are delighted to add this route to our domestic QantasLink network.”

An expansion of the Orange service in future will depend on demand and evolving COVID-19 restrictions.