Cook Park is 4.5 hectares of parkland in the heart of Orange. Built alongside Summer Street, the park embodies the seasonal colours of Orange. Cook Park was laid out in a traditional Victorian design with straight paths and rows of trees, and much of the original design is still in place.

During your visit to Cook Park don’t miss the Park Guildry. The work of local craftspeople can be found in ‘Bastick Cottage’, a Victorian style, heritage building. This crafts group offers a wide range of unique handcrafted goods including pottery, knitting, woodwork, homemade jams and freshly baked goods.

Originally a public reserve in the 1840s, in 1873 the site of Cook Park was proclaimed as a park and in 1882 was officially named in honour of Captain James Cook.  From the 1870s onwards the first trees were planted resulting in today’s mature specimens. Andrew Patterson was the first curator employed in 1887.

The 4.5 hectare park was laid out as a Victorian style public park with the ‘union jack’ clearly seen in the path layout.

Visitors to Cook Park can discover a colourful display of Tuberous Begonias in the Blowes Conservatory from February to April each year.

C W Curran, a local storekeeper is believed to have been the first person to introduce begonias to Orange. Alf Blowes, who was Mayor at the time, showed interest in these plants and was instrumental in the building of a conservatory on the western side of the park in 1934. The central roof ‘lantern’ of the building has the words ‘Blowes Conservatory’ in leadlight across its side.

The first begonias were donated by the City of Ballarat from the Ballarat Gardens and have been supplemented by the purchase of additional varieties.

While begonias make for a colourful display in Autumn, the plants also need extra care and maintenance during the Winter months. This clip shows some of the behind the scenes work by staff in Cook Park during cooler times of the year.

Begonias are endemic to rainforests in South America where they are now considered endangered in the wild. The name ‘begonia’ was given to this genus to honour Michel Begon (1638-1710), an amateur French botanist who collected begonias from Santo Domingo while stationed there with the French Navy. Tuberous begonias were discovered later by an Englishman, Richard Pearce in 1864. 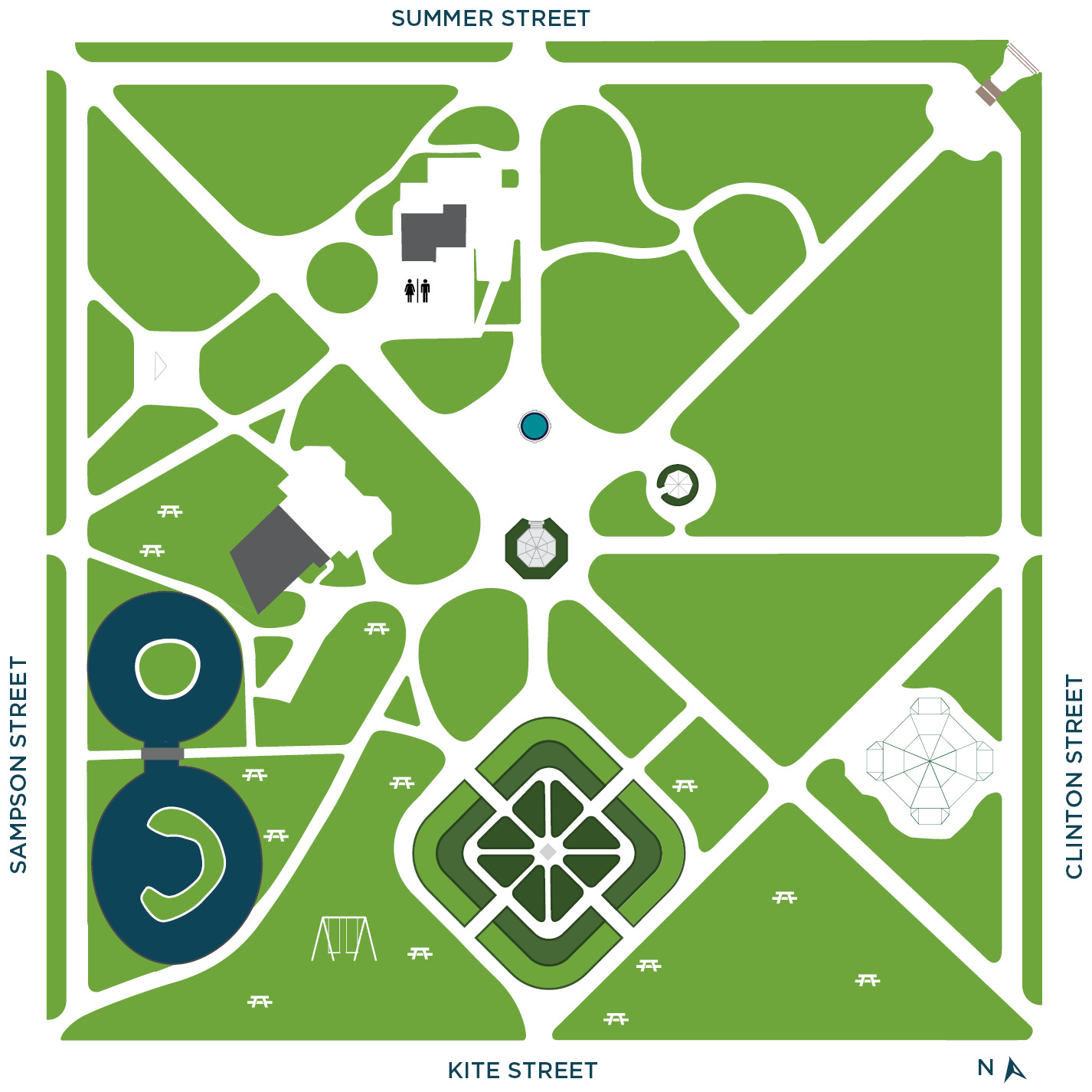 1
BASTICK COTTAGE: The Caretakers Cottage was built in 1887 at a cost of £185. It was named Bastick Cottage to honour two former Parks and Gardens Supervisors who, between father and son, gave 90 years of service to Orange.
2
ENDEAVOUR ROOM: The Endeavour Interpretation Room is located within Bastick Cottage and features historic information about Cook Park, a variety of memorabilia, photographs and displays which change on a regular basis.
3
DEODAR CEDARS: The four Deodar Cedars (Cedrus deodara) planted in the early days of Cook Park, are over 140 years old. These trees form an impressive canopy
4
JAMES DALTON FOUNTAIN: James Dalton donated this fountain to the people of Orange in 1891. Dalton was a wealthy merchant who was part owner of Dalton Bros Store in which Myer is now located.
5
BANDSTAND: In 1907 the Town Band decided to build bandstands in Cook and Robertson Parks. The bandstand in Cook Park was officially opened on 12 March 1908.
6
AVIARY: The original aviary was donated by Dr Wally Matthews, Mayor of Orange between 1936-44 and again 1948-50. In 1995 the aviary was enlarged to its present state.
7
“HUG TREE”: The Sequoiadendron giganteum, is closely related to the Californian Redwoods. At 6.3m around its girth, there is a local tradition of discovering how many friends it takes to ‘hug’ this tree. Trees like this have been known to live to 3,000 years and reach 80m in height. This tree is over 140 year old and is one of the first trees to be planted in Cook Park.
8
BLOWES CONSERVATORY: This glasshouse was built at Cook Park for the growing of Tuberous Begonias. C W Curran, a local storekeeper was the first in the town to introduce Begonias. Mayor A Blowes became interested in them and donated the glasshouse in 1934 to grow Begonias.
9
GATES AT CNR SUMMER & SAMPSON STS: These gates were once the entrance to Robertson Park and in 1927 were relocated to Cook Park. They were made by Dick Venables of Parkes and were paid for by funds raised by holding a sham fight and military display at the Gosling Creek Water Reserve.
10
DuCK POND: The duck pond area provides an ideal site for a picnic. These ponds were redeveloped in 2011 are home to Wood Ducks, Black Pacific Ducks, Turtles, Shags and Ibis. Picnic tables and swings are located nearby.
11
THE FRANK MULHOLLAND MEMORIAL GARDEN: The garden was built in memory of Frank J Mulholland, Town Clerk from 1895 to 1935. The sunken garden and sundial were dedicated on 14 February 1938 by the Hon E S Spooner.
12
AVENUE OF ELM TREES: The 80 year old avenue of Elm Trees (Ulmus procera) provides a cool shady area in the summer and a blaze of gold in autumn.
13
FERNERY: The fernery was built in 1937-38 and was restored as a bicentennial project in 1988. The fernery contains many tree ferns and other shade loving plants. The John Gale Memorial Fountain is now located inside the fernery.
14
BUSH HOUSE: The bush house is a Wisteria covered replica of the original timber gazebo. This provides a shady spot in Summer and a mass of flowers in Spring.
15
CEREMONIAL GATES: The impressive iron gates at the Summer and Clinton Streets entrance to the Park were funded via entertainment organised by J H Kerr of Wellwood.
16
GERMAN FIELD GUN: This was amongst many hundreds of similar guns which were captured in World War 1. This particular gun was captured by the 3rd Battalion on the Somme in France on 18 September 1918. The 3rd Battalion consisted of New South Wales soldiers.
17
24 POUND CANNON: Our cannon, obtained in 1904 from the Sydney City Council bears the initial G3R, indicating that it was made in the reign of George III (1751-1820). It has been identified as 24 pound smooth bore, cast about 1806 at the Carron Iron Foundry in Scotland.
18
BUNYA BUNYA PINE: The Bunya Bunya Pine (Araucaria bidwillii) originates from Queensland. Huge cones resembling large pineapples form around the canopy of the tree every few years. The large seeds were highly prized as food by aborigines.
19
WEEPING SCOTCH ELM: These two Weeping Elms (Ulmus glabra ‘Pendula’) are highly ornamental, with their “cubby house” effect of branches reaching to the ground.

Cook Park is open every day of the year.

The Park Guildry is open 7 days, 10am to 4pm,
closed on Christmas Day and Good Friday
• Picnic tables and toilet facilities are provided
• Dogs are permitted in the park but must be kept on a lead
• Guided tours are available for large groups on request
• Bookings are welcome for weddings or other group functions

Facilities within the reserve include