For the third week in a row, the level of Orange’s water storage has increased.

The level of Orange’s total storage is available each week on the Orange City Council website. This week the total storage level is up to 21.26%, up from 21.05% three weeks ago. (an increase of around 49 megalitres)

Orange Mayor Cr Reg Kidd said it was great to see the city’s stormwater harvesting system and the Macquarie Pipeline adding to the city’s water storage during a drought.

“Orange residents know it would take months not days of this steady rain to make any impact on the drought,” Cr Reg Kidd said. “The moisture profile of the soil is still very low. There’s still been no natural run-off into Suma Park dam for many, many months. 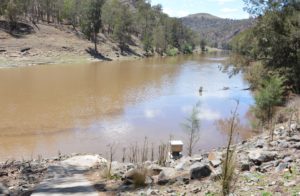 RIVER : Recent rain in the upper reaches of the Macquarie River has delivered good flows at the off-take point for the pipeline to Orange.

“But despite that, the infrastructure that Orange City Council has built is delivering. After years of watching the level of Suma park steadily decline, it’s been great to see signs of how that might potentially be turning around.

“In February, Orange had 61 mm of rain, well below the February average of 74 mm. What rain that fell, soaked away into dry paddocks. But those falls ran off the hard surfaces of the urban area and were captured by our stormwater harvesting system, adding 45 megalitres to our storage. That’s about five days of water use.

“The real breakthrough has come with the decision by Water Minister Melinda Pavey to change the trigger point for the Macquarie Pipeline. Now that we’re using the pipeline as it was originally designed, we’re beginning to see its true potential.

“In February there were good falls across the wider regional catchment and that delivered a steady flow in the Macquarie and boosted flows into Burrendong Dam. We only pump 12 megalitres a day. But, up until to the end of February, we’ve been able to add 133 megalitres from the pipeline to Suma Park dam. That’s the same as about another two weeks water use.

“Last year, during the drought, there were 148 days when the river was flowing at more than the 38 megalitres a day trigger point. Even if this drought continues, the pipeline has the potential to keep pushing back the time when we might have to go to Level 6 restrictions.

“Despite recent rain events, the people of Orange know we’re still in the middle of a drought,” Cr Reg Kidd said. “Our storage levels are hovering around the twenty per cent mark, so it’s no time to be relaxing the fantastic water-saving commitment that our community has made.

“On the other hand, this news comes as a real encouragement to the people of Orange as they battle on.”