Orange Mayor Reg Kidd is encouraging residents not to miss the opportunity to have their say on the city’s bus network in a bid to improve public transport services.

The NSW Government is seeking feedback from bus users and members of the community on how and why they use or don’t use the bus service, what they like or dislike, and what changes could be made to make bus travel more enjoyable for users and more appealing for potential users. 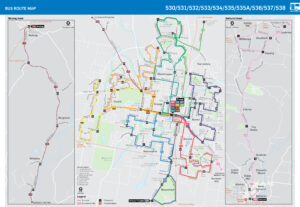 Public passenger bus services in Orange are funded by the NSW Government and operated by Orange Buslines, which runs eight bus routes in Orange.

Cr Reg Kidd has welcomed the Transport for NSW survey and urges residents to offer their opinions before submissions close on Sunday August 16, 2020.

“Improvements could include changes to existing routes or introducing new services, extended operating hours, better connections to outlying villages or direct connections to locations such as the hospital or university,” Cr Kidd said.

“This is an opportunity for people to tell the state government what they want and need from the local bus network to ensure it continues to provide a relevant and important service to the growing city of Orange.”

Phase one, (see left) which was introduced on July 20, involved introducing minor changes to the city’s bus routes such as extended hours from Thursday to Saturday, earlier operating times on some routes and a new Saturday service to Charles Sturt University.

Phase two includes a more extensive review of the whole public transport network in the city, identifying the travel needs of residents and identifying gaps in services to create a better bus network. It is expected to be completed by late 2023.

“It is important that the network services growth areas such as north and south Orange and provides better connections to work, schools, health, social and recreational activities, as well as adjusting to suit changing lifestyles,” he said.

Feedback can be submitted online at yoursay.transport.nsw.gov.au/better-bus-network-orange, by calling 1800 717 528, emailing regionalcitiesprogram@transport.nsw.gov.au or by post to 16 Regional Cities – Orange, Locked Bag 2030, Newcastle NSW 2300.