Orange City Council has launched a plan to kick-start the retail sector of the local business community by giving away one thousand $50 gift cards to local residents.

Launching the ‘Orange City Council Retail Recovery’ campaign, Mayor Reg Kidd said local residents can go in the draw to win gift cards by entering a coupon from a local newspaper or by entering online.

“We know our local retailers have been doing it tough during the pandemic,” Cr Reg Kidd said. “Local residents are very loyal to the Orange business community, so this campaign will make it easier for them to spend in a local store.”

“Now’s the time for residents to get their entries in. For the next five weeks, we’ll be doing a draw every week. Each week will be giving two hundred winners a $50 Shop Orange gift card to spend at a local participating business.”

“We want this money to be spent before the end of September, so these dollars can get circulating in the economy as soon as possible.” 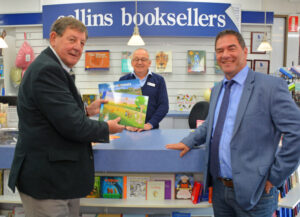 “When someone uses one of these cards at a local store, it’s very likely they’ll be topping it up to buy something that’s worth more than fifty dollars,” Cr Tony Mileto said. “That’s going to increase the value of the Council’s spending.”

“$50,000 is only a fraction of the revenue that’s spent at local stores in a year, but it all helps. It could tip the balance that will let someone make perhaps their first visit to a local store since the pandemic close-down.”

Full terms & conditions for the campaign can be found on the YourSay site.

There are effectively two separate competitions, one using printed entry forms and one using online entries. The entry forms can be found in the Wednesday and Friday editions of the Central Western Daily, as well as in each edition of Orange City LIFE and Newswatch.

As well as local newspapers, the printed entry forms can be found at the Civic Centre and the Orange Visitors Centre. After the weekly draw, the printed forms from the previous week will be discarded, so residents can enter again with a new form for a draw in the following week.

Online entries can be made by visiting the YourSay Orange website.

To make it as fair as we can, someone will need to register with an active email address to enter the online draw. The draw of the online entries each week will include entries in previous weeks.

To see who won in the Week 1 draw click here.