Roads and footpath upgrades to be revealed

Find out which Orange roads and footpaths are on Council’s hit list this year and gain insight into how those decisions are made at a public workshop next week.

Orange Mayor Reg Kidd encouraged everyone to come along to hear and see for themselves how Council staff prioritise work.

“Over the last three years, Council had focused on roads, then footpaths with its budget and you will be able to see on Tuesday exactly what we did with that funding and the difference made,” Cr Kidd said. 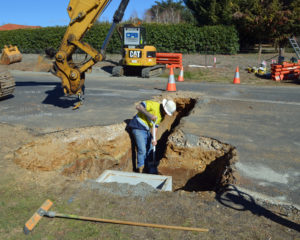 “Given how dry it’s been, it’s hard to cast your mind back to 2016 where we had record rainfall three out of four months.

“That rainfall played havoc with our road network and it was all people were talking about, Council responded by allocating record funding.
“We upgraded dozens of kilometres of roads including major upgrades likes the ones completed in William Street, Leeds Parade, Cargo Road, Forest Road and Kite Street.

“We added several kilometres to our footpath network and we’ve begun replacing asphalt footpaths around the CBD with concrete paths.”

“Council has an asset management system whereby staff physically check the state of a road or footpath, grade it, record it and monitor it,” Cr Romano said.

‘When it comes to scheduling upgrades, the condition of the asset is taken into account, but also how often that road or footpath is used, it’s location, what type of public infrastructure is nearby as well as the community expectation and community requests.

“Staff also need to take into account the future use of an area. For example is there a major road planned in the near future, or a major development where construction could damage the road or footpath.

“We’d like to be as transparent with our systems as possible, which is why we’re inviting everyone to come to the Council Chambers on Tuesday night and learn about how those decisions are made.

“We will also be detailing what is on the list for upgrades this financial year, and what we plan on upgrading over the next four years.”

The public workshop focused on road and footpath upgrades is on Tuesday, August 13 from 6pm.

Work was completed on William Street at night