Room on mountain for bike tracks

Orange Mayor Reg Kidd has welcomed preliminary indications that there is enough space for an environmentally sensitive mountain bike trail to be built on Mount Canobolas.

A team of specialist environmental consultants, appointed by Orange City Council has been working since November last year to identify archaeological and environmentally-sensitive areas, around which a new track can be designed.

A team of experts, including environmental scientists, archaeologists and special track designers have made a number of site visits, and considered submissions from a range of community members and groups. 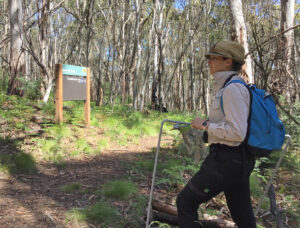 The consultants, Bathurst based firm The Environmental Factor, will give a progress briefing on their work so far at a community forum to be held on Thursday night this week.

Mayor Reg Kidd said he’s encouraged by the first round of findings.

“We’ve asked these consultants to take on the job of independently investigating the mountain area to see if a new network of mountain bike tracks can be built, that are sympathetic to the environment,” Cr Reg Kidd said “We’re still months away from the final reports from the various specialists, but I’m delighted the first round of mapping is showing very positive results.”

“In due course we’ll get a detailed report, and there’ll be lots of time for community discussion. But we want to take up the opportunity of this week’s community forum to keep the community in touch with what’s been found to date. It’s important that the community conversation be based in the facts, and this will be a great opportunity to learn about what they’ve found.”

“Council’s consultant has completed the preliminary stages of mapping locations on the mountain which would constrain the locations of track. This mapping indicates areas where there would be low, moderate and high constraints if tracks were built there, as well as complete ‘no-go’ areas.

“Importantly this mapping indicates the areas on the mountain where the bike trails could be designed.”

“Specialist track designers, Dirt Art, are now working to create a track that is sympathetic to the unique features of the mountain. They’re in the early stages of their work but on Thursday night they’ll be able to giver a briefing on how they’re going about this task, and we’re hoping they will be ready to give a first-look at their work.

“The new track designs are a key element of this project. The network of tracks that were part of an early feasibility study years ago are no longer being considered.

“Track designers will be working hard to avoid sensitive areas and minimize the potential impact. We want them produce a series of trails that will showcase the beauty of the area, so we can share with visitors from across the country.

The one-hour community information session will start 5.30 pm on Thursday 25 February 2021 in the forum of the Orange Civic Theatre. For COVID-safe reasons, numbers are limited. If you’d like to attend the community forum, make sure you RSVP to Renea Meacham rmeacham@orange.nsw.gov.au or phone 02 6393 8000 during business hours.