These incredible drone pictures show the progress being made on the multi-million dollar roundabout on the Northern Distributor Road at William Maker Drive.

The immense $5 million dollar project commenced in February and the work, which is being carried out by local firm Hamcon Civil, is expected to be complete by the end of October, weather permitting. 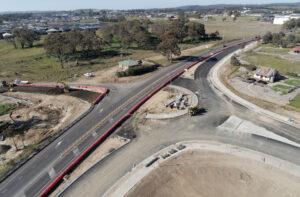 BIRD’S EYE VIEW: The $5 million roundabout on the Northern Distributor Road is an impressive sight from above. Note: Contractors are now working on the other side of William Maker Drive.

Motorists are urged to remain alert when driving through the works, with traffic changes and possible delays in the area.

Eastbound drivers are still able to turn left into William Maker Drive, however, it is expected this intersection will be closed to all traffic in late September to enable the other half of the roundabout to be built.

When this happens, access to and from the Distributor will be at the Telopea Way traffic lights.

Night works are expected to be carried out in October when the Distributor, east of William Maker Drive, will be reduced to a single lane and traffic control will be in place.

The re-alignment of the northern part of Hill Street will continue to be closed off to Distributor users until work to replace the pavement on the western side of the roundabout reaches the old Hill Street intersection.

At this point the old Hill Street intersection will be closed and traffic will be diverted along the new section of Hill Street.

Once completed, the roundabout will be one of Orange’s biggest, and is expected to significantly improve traffic flow in the area. 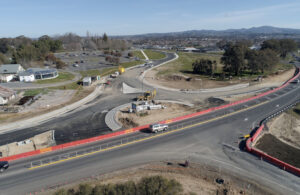 RE-ALIGNMENT: This photo shows the re-aligned northern end of Hill Street, providing access to the car park at the Adventure Playground and Orange Botanic Gardens.