“The pipeline pumps were turned on in mid-February after some good widespread falls of rain,” Cr Reg Kidd said. “At the time we were hoping they would keep running for a week or two. Now, three months later in mid-May, I am over the moon that they are still running.”

“It all comes down to the NSW Water Minister making the decision to let us turn on the pumps at the lower trigger-point of 38 megalitres per day, instead of the previous 119. 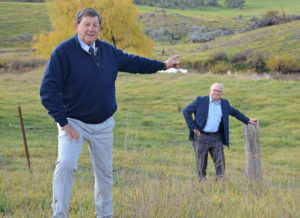 “In those three months we’ve been able to pump every day with the flow in the river always above that point. In that same period there been 15 days when we’ve been below the old trigger point.

“We’ve pumped around 800 megalitres from the Macquarie into Suma Park, and that’s only taken a tiny fraction of the water as it made its way to Burrendong dam. In the same period there‘s only been 183 megalitres from natural run-off into the dam from Summer Hill Creek. Since the start of May stormwater harvesting has added 42 megalitres to our storage.

After reviewing the latest analysis of storage levels and water consumption, Orange City Council’s water managers have further pushed back the date when Level 6 restrictions could begin.

“Based on the conservative assumption that there are no further flows from any source into Suma Park, we’re now in the position where we can push back the start of Level 6 water restrictions until November 6,” Cr Reg Kidd said. “That means pushing them back six months.”

“That’s such a turnaround from the start of the year. I remember standing on the foreshores of the dam in January. The prediction then was we’d be going into the harsh Level 6 water restrictions on the 1st of May. Since then, there’s been steady flows from the pipeline, the first natural inflows from Summer Hill Creek in fifteen months and a fantastic response from the people of Orange to reduce their water use.”

“Based on the actual figures, it’s clear now that without the flows from the pipeline, Orange would have gone into Level 6 water restrictions back in March this year,” Cr Jeff Whitton said. “As it stands now, even if the dry weather of recent years continued, we’re looking realistically at the probability we won’t go into Level 6 anytime soon.”

“As a community we all need to realise that our water storage is still only at 25 per cent. We’ve got a long way to come back from this drought, and we all must continue to play our part in saving water.

“It’s encouraging though, to see data based on the impact of the pipeline and stormwater harvesting during a drought, that will see us climb out of this situation. Together with the other water infrastructure projects we’re working on, we’ll have the level of water security we need as a community to grow.”