Struggling poplars to be removed from walkway

By Council CommunicationsMay 16, 2019News
No Comments

Nine poplar trees are set to be removed from Wirrabarra Walk this week, in the first stage of an Orange City Council plan to rejuvenate the area.

Within the row of around sixty poplar trees there are approximately 30 trees that are showing signs of stress and decay due to the drought and their age.

The debris from a tree that fell down across the walking path last weekend was removed by council crews on Tuesday. The fallen tree was found to be heavily decayed at the base of the trunk.

A further nine trees at the northern (Forbes Road) end of Wirrabarra Walk will be removed by contractors on Thursday this week. It’s expected the remainder of the trees will be removed and replaced with an alternative species in due course.

Mayor Reg Kidd said local residents are being kept in touch as plans for the walkway take shape.

“Council staff organised a gathering of residents to discuss plans to remove the trees”, Cr Reg Kidd said. “We’ll continue to consult as plans are finalised and as the replacement trees species is chosen as well as other upgrades.” 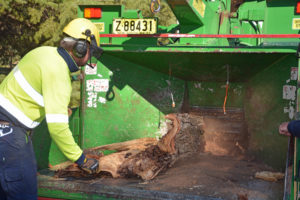 “We’re looking at options such as Oak or Maple varieties that ‘mimic’ the growth habit of the poplars so as to maintain the walkways character and provide shade in summer, colour in autumn and allow the sun during winter over the walkway that’s used by hundreds of people every week.

“It’s a much-used area both for dog-walkers and other residents simply out for a stroll. We’re also looking at upgrading the entrances at either end to install seats and bubblers.”