Tickets to go on sale for netball clash

UPDATE: Tickets have SOLD OUT

Orange will host the first 2021 Suncorp Super Netball game with spectators watching in the venue, since the season closed in 2019, as the Giants take on the Adelaide Thunderbirds in a pre-season match.

The two teams will take the court on Saturday, March 6 at the Anzac Park indoor stadium. 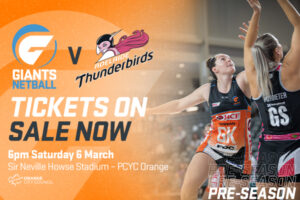 Orange Mayor Reg Kidd said the event is set to be one of the biggest ever sports event at the stadium.

“Netball is a huge participation sport in Orange,” Cr Kidd said. “This is going to be the biggest ticketed event ever held at the venue. I’m sure these tickets will go very quickly so it’s important for local fans to get in early.”

Orange City Council’s Sport and Recreation Committee chair Jason Hamling is pleased with planning for the event so far.

“Hosting an event of this size has been a great test of how the Anzac Park venue can be adapted for a big game,” Cr Jason Hamling said. “For the first time, the match court is going to re-aligned from the usual multi-court lay-out to have a single court running lengthways along the building.”

“It will deliver the extra space around the court that’s required for a Super Netball game. It’s also going to give us room for 700 seats, both on the floor-level and in tiered grandstand seating.”

“I’m pleased ticket prices have been kept to an affordable level for families. Seats will be available from $12 to $21.”

“If people are interested in seeing this game, the important thing at this stage is go online from nine Wednesday morning.”

Tickets can be bought from the 123Tix site from 9 am Wednesday 17 February.