Orange City Council is increasing the number of tree plantings in response to a recent survey that has revealed the impact of drought on the city’s street trees.

An estimated 200 trees died or suffered significant dieback due to the dry period from 2018 to 2020, as well as the legacy of the Millennium drought earlier this century.

Orange City Council’s tree crews have been gradually removing the dead trees and estimate all dead trees will be removed during 2021.

However, it is anticipated that others will be added to the list as trees continue to show signs of decline and the long lasting effects of severe drought conditions prevail. 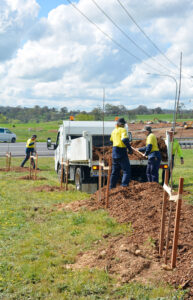 In response to the damage caused by the drought, Council expanded its street tree planting program in 2020, planting approximately 600 new street trees, not only to replace the dead trees but to increase the number of street trees around the city.

A tree establishment crew was also introduced, with the responsibilities of planting and watering new trees and providing formative pruning.

Crews have also begun watering young street trees that have been planted in the last couple of years as the weather warms up and conditions begin to dry off.

“There are a lot of trees being planted, especially in the new suburbs, as the city expands to the north and the west, and now to the south as well,” Cr Kidd said.

“Once established, these trees will create a stunning network of shady streets, improving the aesthetic value of our suburbs, combatting the effects of urban heat and reinforcing Orange’s reputation as the Colour City.”

In addition to street trees, an average of 2500 natives are planted in parks and reserves around the city and outlying areas each year.

Trees, shrubs and grasses are planted to increase biodiversity, regenerate the natural environment and provide habitat for native animals.

“It’s great to see the next generation getting involved and learning how to care for their local environment.”