UNDERWORLD: Mugshots from the Roaring Twenties

UNDERWORLD – a stunning new exhibition of police mugshots from the 1920s known as the ‘Specials’ opens at Orange Regional Museum at 6pm on Thursday 31 October.

Descend into Sydney’s seedy underworld. Lying beneath the surface of the Art Deco glamour, jazz and sophisticated society lurks a world of gangs, guns, vice and violence – welcome to the dark side of the Roaring Twenties.

“This decade saw massive social upheaval and fast times bred new crimes”, says Nerida Campbell, Curator, Sydney Living Museums.
“Criminals moved into new markets including the illicit sale of alcohol and cocaine and the police had to employ every tool and technology available to keep up.”

Taken between 1920 and 1930, these compelling images of criminal bosses, plotters, bruisers, petty crims, wayward youth and fallen soldiers were never intended to be seen by the public. Suspects smile, scowl and simper for the camera in poses of their own choosing unlike the deadpan stares found in conventional mugshots from around the world.

These images have attitude be it good, bad or indifferent. As well as capturing the subjects physical appearance, they show a hint of their personality; smoking, reading, chatting, slouched on chairs, holding handbags and often wearing stylish outfits. 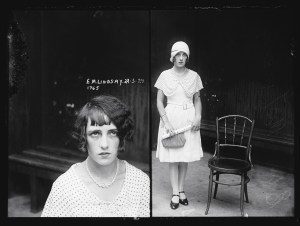 After nearly 100 years, more than 2500 ‘Specials’ images have now been scanned and researched as part of the NSW Police Forensic Photography Archive held at the Justice & Police Museum.

Nerida Campbell continues, “The collection is mostly made up of glass-plate negatives that have been digitally scanned. The high quality of the material on which they were captured and the skill of the police photographer allows us today to see a wealth of unexpected detail.”

UNDERWORLD: Mugshots from the Roaring Twenties will feature over 130 images reproduced from the scanned original glass plate negatives. Accompanying the images are the backstories of the suspects revealing criminal activity, networks and some international links.

From serial offender Edward Banbury who stole a police motorbike and rode it all the way to Queensland to Gladys Lowe who was convicted for opium possession, all the mugshots are unusually candid, infused with personality, presence and poignancy.

“It is important that we welcome new exhibitions and shows to the city of Orange to meet the needs of interested residents, and continue to encourage visitors to take the time to come here and see what our facilities such as the museum has on offer,” Cr Munro said.

Accompanying the UNDERWORLD: Mugshots from the Roaring Twenties exhibition is the UNDERWORLD publication: https://shop.sydneylivingmuseums.com.au/products/underworld

UNDERWORLD: Mugshots from the Roaring Twenties will be opened at a free public event by Nerida Campbell, Curator, at 6pm on Thursday 31 October. The exhibition will be open to the public during 9am-4pm daily (excluding 25 December) from Friday 1 November 2019–Sunday 1 March 2020.