Orange Mayor Reg Kidd has welcomed the announcement to fund the upgrade of a rest area at Chinaman’s Bend on the Mitchell Highway east of Orange.

Member for Calare Andrew Gee today announced $56,500 would be used to upgrade the rest area under Round 7 of the Heavy Vehicle Safety and Productivity Program (HVSPP).

“Improvements to the Chinamans Bend Rest area will be great for truck drivers as well as locals and visitors wanting somewhere to pull over safely. The funding will go towards re-sealing the large rest area and creating designated truck parking places.

UPGRADE : Member for Calare Andrew Gee and Mayor Reg Kidd check out plans to upgrade the roadside rest area by the Mitchell Highway.

“The current surface of the rest area is in dire need of repair and this funding will go a long way to improving the useability and look of the area,” Mr Gee said.

“By improving the amenity of this rest area, it will hopefully also encourage people to stop  and learn of the significant history of the site,” Mr Gee said.

“The Chinamans Bend rest stop is adjacent to the Chinamans Bend Cemetery, Orange’s oldest cemetery, which still contains a number of headstones dating back to the 1840s. It is a physical record of one of the first European settlements in the Orange region in the mid-1820s.”

Orange Mayor Cr Reg Kidd said he was delighted to see news of the upgrade.

This roadside area is popular with passing drivers,” Cr Reg Kidd said. “Orange City Council is pleased to be working in partnership with the Australian Government to improve the quality and safety of this stopping area,”

“Council routinely maintains the site and there’s an interpretive sign with more information about the historic cemetery. If you park there the cemetery is certainly worth a stroll to stretch your legs.” 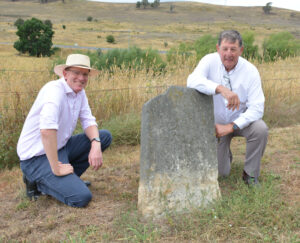 HISTORY: Member for Calare Andrew Gee and Mayor Reg Kidd inspect one of the gravestones in the historic Chinamans Bend cemetery.