Ms Pavey said the government was continuing to fund critical water infrastructure projects for central west communities, as part of its emergency response to drought in regional NSW.

“While the drought has eased in some areas, many towns continue to be at risk of water shortages or have already been living on severe water restrictions,” Mrs Pavey said. 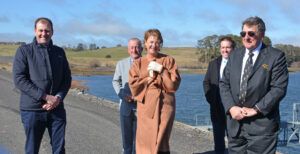 “Despite recent rainfall, water supplies for communities in the Central West region continue to be at risk and this funding is crucial to ensuring their long-term water security.”

“These projects are drought response projects, but they will create permanent infrastructure that will improve the resilience of the central west for the years ahead and support its communities and economies.”

Orange mayor Reg Kidd said the new pipeline will reduce water losses in the system. Currently water has to be transferred along the creek to Suma Park Dam.

“Almost all the 6 km pipe is now in the ground,” Cr Reg KIdd said. “The project began in June and is on time and within budget.”

“Two large pumps that are needed to move water along the pipeline are being manufactured in France. These 220 kW pumps are capable of delivering 190 litres per second of water uphill to the Water Treatment Plant.

“It’s expected the pipeline will generally operate in Winter between May & September.  Because Spring Creek dam is higher than Suma Park dam, OCC will save around $170,000 a year on pump running costs when you compare the costs of pumping from Suma, to pumping from Spring Creek.

“When the pumps arrive in October, the project will be completed in October this year ”