Why don’t you use the opportunity, caused by the drought, to excavate the dry bed of the dam to increase its capacity?

WATER-FACTS : ANSWERS TO THE QUESTIONS COMMUNITY MEMBERS ARE ASKING

This is a suggestion that comes up from time to time :  If you dig into the dry bed of a dam while it’s empty, surely that will increase its volume.

It’s an idea that can make sense with a small farm dam.

However, the larger the dam, the less practical the idea is.

Think of it this way : It’s easier to create storage space in the air above the dam (by adding a higher wall on one side) than it is to dig soil out below the dam.

The problem is the huge amount of soil that would need to be removed to get a useful amount of extra storage space for water.

Imagine removing a cubic metre of soil from the dry bed of the dam. This would give you enough space to store 1,000 litres of water.

To get one megalitre of extra storage space, you would need to remove 1,000 cubic metres of soil.

To get an extra 1,000 megalitres of storage, you would need to dig up, transport and then find somewhere to put one million cubic metres of soil.

Raising the height of the dam wall is usually the most effective way of increasing the storage capacity of a dam. (Orange’s Suma Park dam was recently expanded by around 2,000 megalitres by raising the dam wall by 1 metre.)

The last time a local project along these lines was considered in Orange, a proposal was floated to ‘de-silt’ Spring Creek dam was investigated. It was estimated this work would only increase the dam’s storage by 148 megalitres. Because of the comparatively high cost, this project has not taken a high priority. 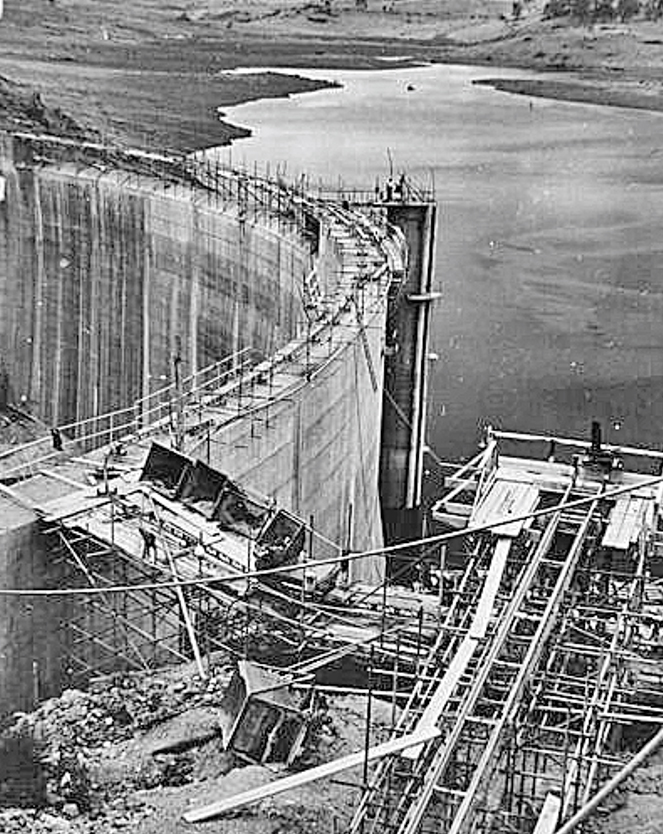 CONSTRUCTION : The dam wall at Orange’s Suma Park dam was built in 1962.

It’s also worth remembering that it only becomes important to increase the volume of your dam, if water overflows the spillway.

Until then, it’s only the amount of inflows that will make a difference to how much water it contains. (And how much you’re using.)

So, it’s also a question of how often your dam overflows.

Orange City Council made the decision to increase the capacity of Suma Park dam by 10% by raising the height of the dam by a metre. A couple of months after the project was completed in mid-2016, water overflowed the dam wall.